In recent years, the ever-growing popularity of Japanese style ramen and the robust flavors of Tonkotsu and Shoyu, to name a few, have opened the door for other traditional Japanese noodles like Udon and Soba to gain popularity in the United States. However, there are many more unique noodles (and with them, cultures) specific to Japan that are still widely unknown overseas. Myojo USA, whose goal is to deliver authentic ramen of Japan to everyone living in the United States, also offers products with flavors unique to the region. This is our “Local Ramen” series. We have three products: Okinawa Soba, Nagasaki Champon, and Sapporo Miso Ramen. We have received happy comments from people who can now enjoy delicious noodles of Japan in the states. Today, we would like to introduce one such noodle dish. Originally from the southernmost prefecture of Japan, “Okinawa Soba” carries a distinct taste with a rich culture. We will be explaining in detail how to make a basic Okinawa Soba, the ingredients, and the types of noodles!

■What is Okinawa Soba?

Though its name implies that it’s a type of traditional soba, Okinawa soba more closely resembles ramen. It’s made by kneading kansui (a type of alkaline water) into wheat flour (like ramen), whereas traditional soba uses buckwheat flour in its recipe. The shape of the noodles varies depending on the area they are served in, but they are broadly divided into “flat noodles,” “curly thick noodles,” and “thin noodles,” and are characterized by their chewy texture and firmness. One leading difference that Okinawa soba has with ramen, is that after the noodles are boiled, they are drizzled with oil. Originally, this process preserved the noodles before the invention of refrigerators. Though an unnecessary step nowadays, it’s still followed to create a taste unique to Okinawa.

The soup base is flavored with pork bones and dried bonito flakes, and the ratio determines whether the taste is rich or light.

The following are typical ingredients:

Due to the fact that Okinawa is an island, its food and culture were rarely influenced by mainland Japan, which is why Okinawa soba’s unique taste has been handed down for generations by the people of Okinawa with few modifications. In recent years, Okinawa soba has become well-known throughout Japan, along with “Goya Chanpuru (Stir-Fried Bitter Melon)” and “Umi Budo (sea grapes)”. It’s now common to find them on Okinawan restaurant menus in mainland Japan.

Before introducing Okinawa Soba in detail, we will first introduce other Okinawan cuisine! Even though Okinawa is a Japanese prefecture, it has its own unique food culture. In addition, Okinawa is a tropical island that is warm throughout the year and has abundant ingredients unique to warm climates. Fascinated by its food culture and beautiful nature, it is known as a tourist destination where many people visit not only from Japan but also from overseas.

Local Cuisine That You Want to Eat on Your Trip to Okinawa
・Okinawa Soba (Soki Soba)
First and foremost, Okinawa Soba! There are various arrangements depending on the region. It is one of the pleasures to taste Okinawa Soba unique to each region you visit in Okinawa.

・Goya Champloo
Champloo is an Okinawan dialect word for “mix-up.” Essentially, it is a dish in which tofu and other ingredients are stir-fried together. It is often enjoyed with an Okinawan vegetable called Goya (bitter gourd).

・Taco Rice
At first glance, the name is similar to Mexican tacos. However, Taco Rice is a food that is said to have originated in Okinawa. Lettuce, tomatoes, seasoned minced meat, and cheese are placed on top of rice. The spicy taste is addictive!

・Geema Mi Tofu
“Geema Mi” means “peanuts” in Okinawan dialect. Compared to an ordinary tofu, it is characterized by a moist chewiness, followed by the flavor of peanuts.

・Chinsuko (Cookie)
Chinsuko is a type of sweets made with three kinds of ingredients: flour, sugar, and lard. With a crispy texture, it is popular as a standard souvenir of an Okinawa trip.

・Sata Andaghi (Doughnut)
A round sweet fried in oil, Sata Andaghi is an Okinawa-style doughnut that is crispy on the outside and soft on the inside, with a subtle sweetness of sugar added.

As shown above, Okinawa has its own unique food culture. Let us take a closer look at Okinawa Soba, a dish that has special presence among the local ramen of Japan.

Today, there are more than 300 specialty stores offering Okinawa soba. In the Okinawa prefecture alone, the noodle is consumed an average of 150,000 meals a day. Although a beloved dish by the Okinawan people, Okinawa soba used to not be very common. Its recipe can be traced back 450 to 500 years ago, to the royal cuisine of the Ryukyu Kingdom. The Ryukyu Kingdom existed primarily throughout the islands of Okinawa prefecture from the 15th to the 19th century. At the time, the islands were actively in trade with China, and it’s believed that the Chinese noodle culture eventually reached the shores of Okinawa. However, noodles were traditionally served as a court dish, and rarely eaten by ordinary citizens. Over time, the number of restaurants offering Okinawa soba increased and citizens began to enjoy the dish after the latter half of the Meiji era (1868 – 1912). Back then, Okinawa soba was soy sauce based, but evolved throughout the generations to the dish we know today—pork bone and bonito broth.

October 17th is officially known as “Okinawa Soba Day” and commemorates the day in which Okinawa soba was recognized by the government. The story of this important event starts in 1976, when the Fair Trade Commission in Japan notified the Okinawa Raw Noodles Cooperative that “Okinawa soba does not use buckwheat flour at all, so it should not be labeled as ‘soba’”. In order to protect the name that has been passed down for centuries and loved by the locals, Kenichi Doi, who was chairman of the Okinawa Raw Noodle Cooperative at the time, initiated a movement to keep the name “soba” in the dish. Due to his efforts, the Japan Fair Trade Commission recognized the name “Okinawa Soba” on October 17th, 1978. Thus, Okinawa Soba Day was established by the Okinawa Raw Noodle Cooperative.

■The Differences Between “Okinawa Soba” and “Soki Soba”

Some readers may have heard of and/or tried Soki Soba and may be confused by the differences between that and Okinawa soba.

Soki soba is quite similar to Okinawa soba in that it has the Okinawa soba broth and noodles as the base. The difference is that Okinawa soba generally uses Sanmainiku (pork ribs with skin slowly simmered in sugar and soy sauce) as the main ingredient whereas Soki soba uses spareribs or soki. Soki soba has two distinctions: Hon soki, which is served with hard bones (that cannot be eaten) and Nankotsu soki, which is served with soft bones (that can be eaten). Both are carefully simmered in sugar and soy sauce, going well with the light Okinawa soba broth.

■Was Lye Used in the Past? How to Make Okinawa Soba Noodles

Today, Okinawa soba noodles are made with wheat flour, salt water, and kansui. Many people may not be familiar with kansui, but it’s an aqueous alkaline salt solution used to manufacture Chinese noodles, etc., and is mixed with wheat flour to provide a unique and smooth texture. Kansui also gives Chinese noodles their distinct yellowish color.

In the past, when it was difficult to obtain kansui, the supernatant liquid (lye) was used instead. This water is mixed with the ash from burning Okinawan trees such as banyan tree (called gajumaru in Okinawa). Like kansui, this lye also contains an alkaline component, and also gives the noodles a unique and smooth texture.

■Seasoning your Okinawa Soba with “Kōrēgusu”

In any Okinawa soba shop in Okinawa, you’ll find chili sauce on the tables. This is called Kōrēgusu, which is made by immersing shima tōgarashi (Okinawa chili pepper) in awamori (distilled sake from Okinawa). It’s difficult to find in the U.S., but if you manage to get your hands on some, it’s recommended to taste the broth first before adding any seasoning. From there, you can add some extra flavor.

■Restaurants that Serve Okinawa Soba in the United States

Okinawa soba is already popular in Japan, but unfortunately, its recognition in the United States is still small compared to other types of ramens such as tonkotsu. However, if you enjoy ramen and want to experience a new flavor, Okinawa soba is well worth a try.

There are not many restaurants in the United States that offer authentic Okinawa soba, but we’d like to recommend a few that do. If you are visiting the area or live nearby, please check these restaurants out:

As mentioned earlier, there are still not many restaurants in the United States that offer Okinawa Soba noodles. If they are not available, why not make them at home?
Using the local ramen series currently on sale at our company, we will introduce a recipe using “OKINAWA SOBA.” Derived from a simple recipe of the standard Okinawa Soba, Myojo USA will introduce three recipes you can try! Even if you do not have ingredients available at a supermarket near you, you can make your own original recipe with your choice of toppings! Whether you want to eat delicious ramen and Okinawa Soba noodles in the states, or if you want to make traditional Japanese dishes, it is worth trying.
Please enjoy the combination of refreshing soup and addictive, firm flat noodles that are a little different from the usual ramen! It is characterized by a simple soup with flat noodles and bonito broth peculiar to Okinawa Soba noodles. Serve with pork belly, fried sweet potatoes, green onions, red ginger, and other toppings.
The recipe is here:
https://www.myojousa.com/recipe/okinawa-soba/ 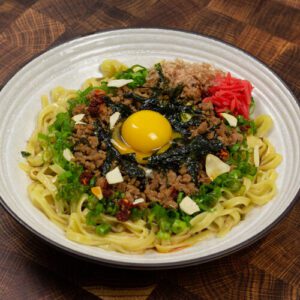 Mazesoba and Mazemen are a type of ramen without soup. Using the soup packet included in “OKINAWA SOBA”, you can easily make a sauce for mixed soba noodles. Stir well before eating, and enjoy the rich taste of toppings and sauces, and noodles well intertwined!
The recipe is here:
https://www.myojousa.com/recipe/okinawa-soba-mazemen/ 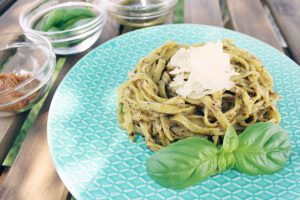 Myojo USA’s fresh noodles used for “OKINAWA SOBA” have a chewy pasta-like texture. The mellow flavor of miso and pleasant aroma of Genovese is enjoyed altogether.
The recipe is here:
https://www.myojousa.com/recipe/okinawa-soba-miso-pesto/

Okinawa soba is not well known in the United States yet, but the combination of the lightly seasoned soup and thick chewy noodles is distinct from other ramen dishes. This is a perfect flavor for ramen lovers looking to try a new taste in the US. Interested in Okinawa soba after reading this article? Take a visit to the Okinawan restaurants listed above and/or try our simple recipe at home!

NEXT
Champon: A Regional Ramen with Exotic Influence from Nagasaki. How is it different from ramen? 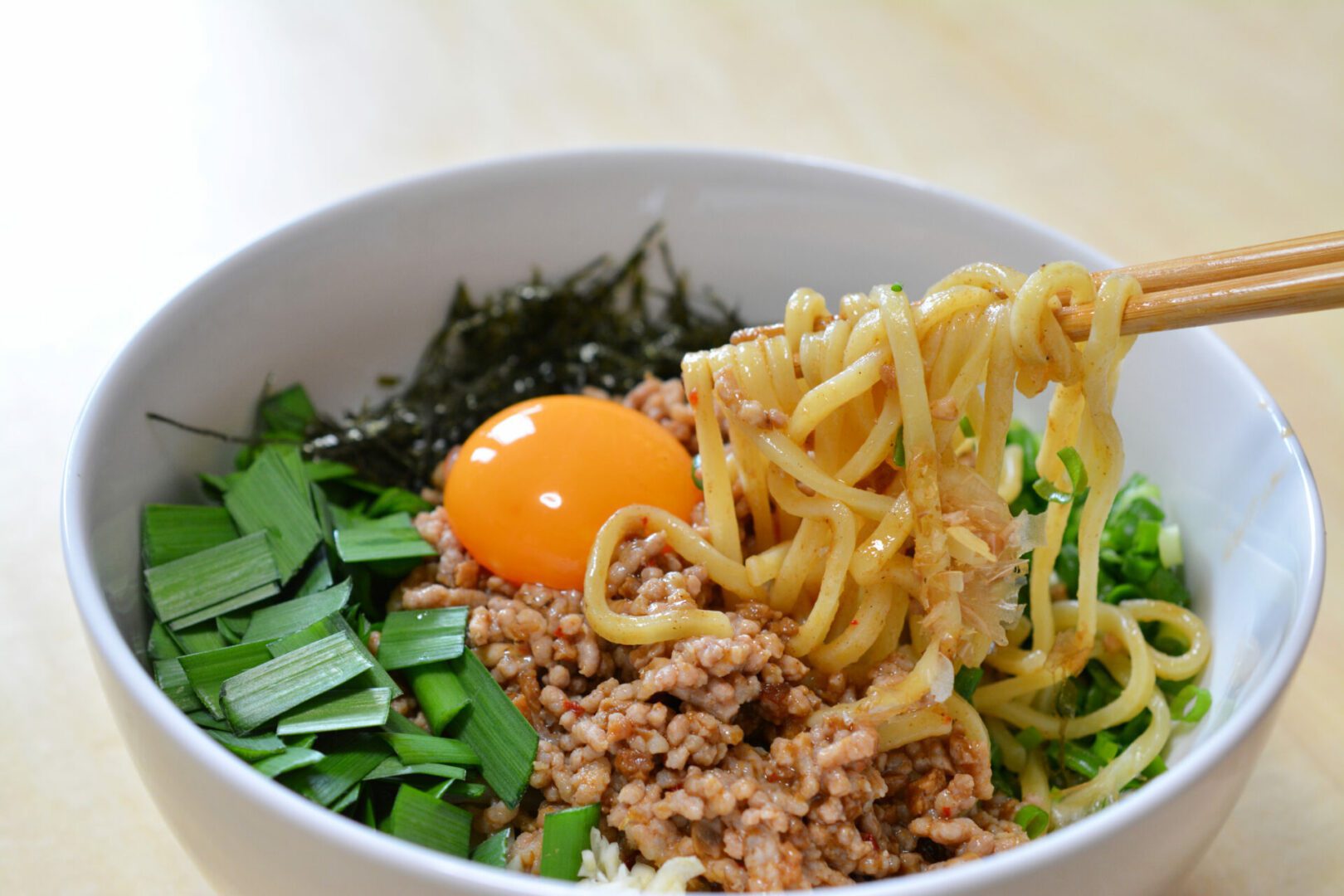 Champon: A Regional Ramen with Exotic Influence from Nagasaki. How is it different from ramen? 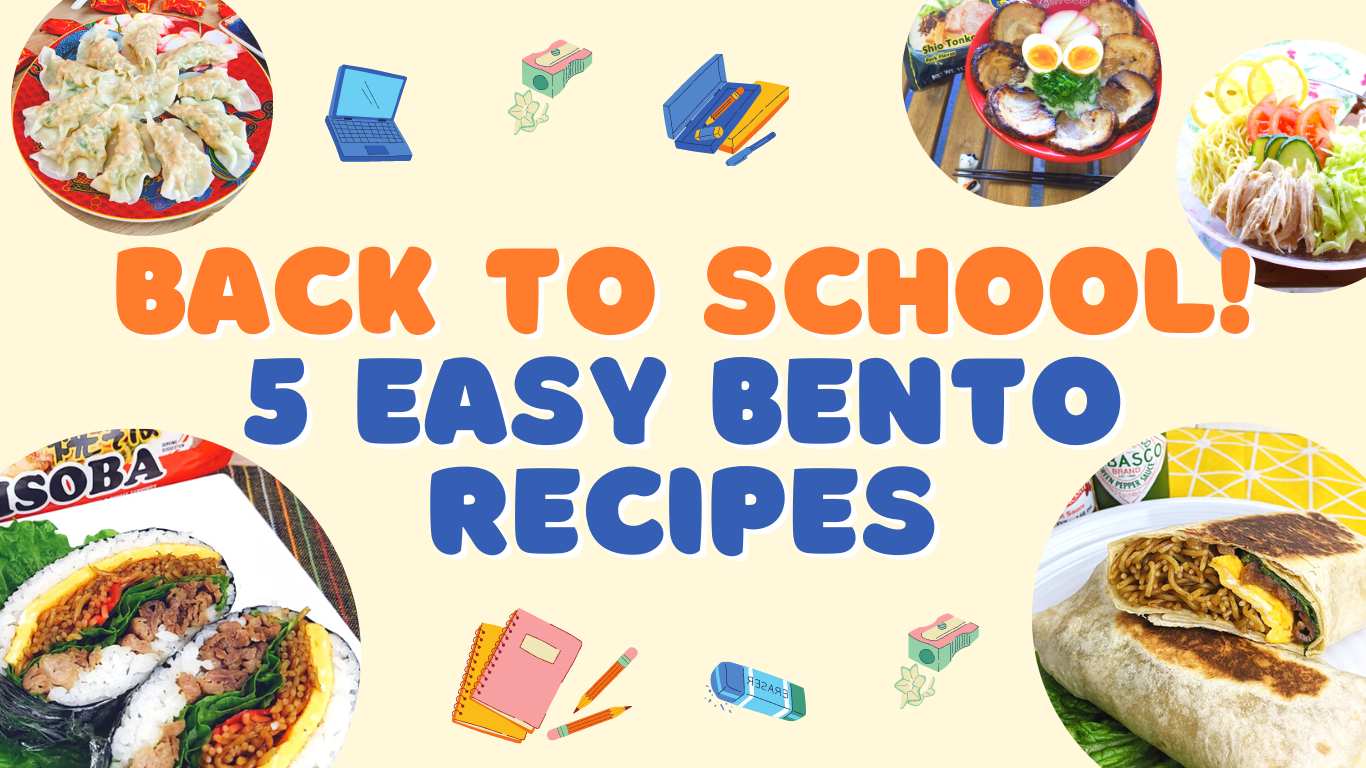